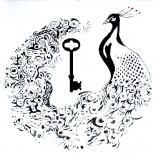 Would you want Israel at your gay wedding? 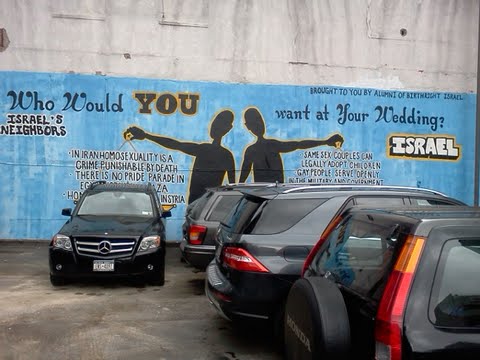 A mural celebrating gay rights in Israel has been painted on the wall of a parking lot in Manhattan’s West Village. It was sponsored by alumni from Birthright Israel, an organization which brings any Jewish person from New York City or Los Angeles to Israel, free of charge, and brainwashes them into believing that God bestowed the land of Palestine to Jews and Jews only and that God gave Jewish people the right to destroy Palestine and rename it Israel. Another purpose of the trip is to encourage  more Jews to move to Israel, into homes and onto land which belonged or currently belongs to the indigenous Palestinian population.   This process is known as colonization and ethnic cleansing and has been occurring since before Israel’s founding on May 15 of 1948.

I heard about the mural through an article on the website Queerty, so I decided to take a walk down to it on my lunch break and snap some photos.   Just to be clear, the mural couldn’t be in a more out-of-the-way spot.  The closest train is a 10 to 15 minute walk, and locating the mural is actually quite difficult, because it’s painted on the side wall of an outdoor parking lot, the bottom of it covered by parked cars.  This lot-mural is in an upscale area of the West Village (as if there is an area of the West Village that isn’t upscale) close to the West Side Highway. The only people who will ever see it are 1%ers who can afford to live in its vicinity, the parking lot attendant, and the occasional pier queen who’s headed too far south of Christopher on her way back to the train.

This should be added to the list of actions taken by pro-Israel groups to “pinkwash” Israel’s crimes against the Palestinians: apartheid and ethnic cleansing. Pinkwashing is the attempt by a state, in this case Israel, to highlight its treatment of gays to show how progressive it is, in turn covering up human rights violations from which it wishes to detract attention. Fortunately, many radical queers who do not separate gay rights from human rights have caught on and are actively fighting this – see Pinkwatching Israel, NYC Queers Against Israeli Apartheid and Pauline Park’s blog.  Recently, the Equality Forum held its annual conference in Philadelphia and mistakenly chose Israel as its featured country for 2012. Please see Sherry Wolf’s excellent piece on the subject, Equality’s Racism: Using LGBT Rights to Veil Apartheid.

One of the problems with applauding Israel on gay rights is that the rights that Israel gives to gay people are not for all gay people.  Israel occupies and controls what is left of the land of Palestine: Gaza and the West Bank.  The daily lives of the Palestinians who live there are governed by Israel in every way because the Israeli military barricades Gaza by land, sea and air, and physically occupies the West Bank.  Of those Palestinians who live in Gaza and the West Bank, some of them are queer.   This means that Israel’s occupation and ethnic cleansing directly affect queer Palestinians. For proof of queer Palestinians, please see Palestinian Queers for BDS and Aswat Palestinian Lesbian Women. If people are so concerned with queer Israelis having the right to marry each other, then they must also be concerned with queer Palestinians having no rights at all. Queer Palestinians pass through Israeli checkpoints where they are searched, sexually harassed and humiliated on a daily basis. Queer Palestinians see their parents arrested and held without charge.  Queer Palestinians see their younger siblings dragged out of bed in the middle of the night by Israeli police and thrown into adult jails on charges of stone throwing. Queer Palestinians get tear-gassed (with canisters that come from the Combined Systems Inc factory in Pennsylvania, USA) and shot at while protesting against the daily humiliations of the occupation.  Queer Palestinians suffer under Israeli oppression in a way that is not made better by queer Israelis being granted some form of equal rights. And to the best of my knowledge, there is no queer “express lane” at an Israeli checkpoint.

Furthermore, the idea that we can cast the whole of Israel as  a gay oasis is arguable.  I live in New York City and resist the urge to say that the even it is entirely gay friendly.  I’d say that to some extent, Chelsea and the West Village are, but I’d think long and hard before making out with my boyfriend on the platform of the 7 train at Queensboro Plaza.  I’m sure many gay Israelis pick and choose the areas in Israel where they make out with their respective boyfriends/ girlfriends/ gender-non-conforming friends.

The other issue that needs to be discussed is the idea of being “out”.  I would argue that many queer folks in the West don’t even think about queer Palestinians because they aren’t “visible” or “out” in a way that is recognizable to us. This has been a hard one for me to wrap my head around, but as folks in the Western world, we really need to think about it.  Does being out of the closet look the same everywhere?  Is it fair for us to judge other areas of the world by how many gay bars they have or if they have a flipping gay pride parade or not? Is that how gayness/ queerness has to show itself?  Is sexuality in the Middle East viewed in the same way that it is in Europe, the US and Israel?  I’m not condoning human rights violations anywhere, clearly, I’m just asking that we recognize that there are gay people everywhere, even if they don’t present their gayness in a way we find appropriate. And since there are gay people in the allegedly horrible, homophobic land of Israeli-Occupied Palestine, then shouldn’t we extend our hand even further to help them instead of applauding the regime that ultimately oppresses and humiliates them.  Should we expect queer Palestinians to open gay bars and have a pride parade when they can’t even visit their partners without going through an Israeli checkpoint?  And that’s just in Israeli-Occupied Palestinian territory.  Imagine if their partner is in Tel-Aviv!

In closing, I’d just like to say how wonderful it is that Israel let’s queer Israelis  adopt children and serve in the military which terrorizes Palestinians on a daily basis.  And how wonderful that Birthright Israel alumni felt so moved by these two facts that they dragged a 10-foot ladder to the West Side Highway and painted an ugly mural on the wall of a parking lot.

9 comments on “Would you want Israel at your gay wedding?”